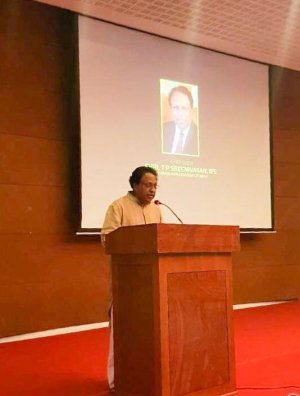 I released the book on January 26.

Architect Gopakumar has done the world a favour by telling his remarkable story of an architect, whose creations dot the skyline in Kerala and beyond. He has done me a particular honour by asking me to write a Foreword for his book through my brother-in -law and his friend, Chandramohan, himself an innovative engineer of the marine variety, because I would not have even seen the book or read it otherwise. Every time I am invited to write a Foreword for a book or to release one, I am compelled to read it and most often it expands my horizon of knowledge and leads to the discovery of a new writer. Reading ‘Mind of Fire’, literally ignited my interest in architecture and I discovered a gifted and charming story teller. If he had not become an architect, he would have won a Booker Prize for literature instead of the Baburao Mhatre Gold Medal for his architectural genius.

“Fools build houses and wise men live in them,” has been my dictum, quoted in the book, not really by design, but because of my peripatetic career in the Indian Foreign Service for thirty-seven years in a dozen cities. We moved homes every three years from country to country and several times in the same country and lived in Government houses ranging from a mud house in Bhutan to a castle in Austria. Whenever we thought of investing in real estate as investment in India, we bought built up homes of indifferent quality. I have many architecture friends like the Gopakumar brothers, B.R. Ajit and Mahesh, but never used them professionally.

Interestingly, the one world famous architect I interacted with professionally for the Government of India was Gopakumar’s mentor and his first employer, Charles Correa himself. Reading about the author’s experience of Correa, I was able to understand the man better, many years after I worked with him for about three months at the finishing stages of the apartment complex he built in Manhattan for the Permanent Mission of India to the United Nations, known even today as the Correan Mission. I found him difficult to deal with, as he was volatile, irritable and impatient. Now I know from the book that he believed that volatility is a hallmark of an architect. The building was almost finished when I reached New York as an Ambassador to the UN in 1992 after many delays because of his fertile mind which changed very often. But two major issues came up because of his stubborn nature. First, it was his decision to import steel plates fem Canada to clad the entire building. Apart from the worry of New York City authorities about the plates being blown away by the strong winds, the manufacturer went bankrupt in between and we had to wait till another company came up with an offer which far exceeded the original cost. But Correa was not moved by any of these and persisted with his plan.

Another issue was that my room, I found to my horror, had no windows. His reaction was that a window was not necessary as there was no view as it was on the second floor in the concrete jungle of Manhattan. Why did I need a window in a centrally air-conditioned building without a view? But I stuck to my guns and the Ministry of External Affairs said a window should be opened even at that stage. The wall on one side had to be cut open and a window was made at a cost of US$ 89000! When Gopakumar writes that breaking of their own buildings and rebuilding them is a habit with some architects, I can relate to it. I understand that Satish Gujral, a self- taught architect used to do it, at great loss to the owners. Though I was not paying for the window myself, the bureaucrat in me revolted at the very thought. But my experience with another genius, M.F.Hussein, sent by Indira Gandhi to decorate the building was another horror story. Gopakumar is indeed a master diplomat to have won the approbation of Charles Correa.

The book has opened my eyes to the whole world of architecture and design, which we generally take for granted. I liked some structures and disliked others, but I never bothered to find out who the architect was and what his motivations were. Now I know how the architect in Gopakumar was made and how he flourished through hard work, innovation, dedication and imagination. To know that he had made a master plan for Kovalam -Vizhinjam beach area, which was lost in an air crash with the legendary builder of Thiruvanantha puram, Col.GV Raja, how he worked with the famed architect, Laurie Baker, how he had helped Charles Correa to build the ITDC hotel in Kovalam, how the idea of converting rice boats into houseboats occurred to him first, how he thought of the massive Jatayu sculpture, which is a reality, how he thought of the Bolgatty Marina, how he built landmark buildings like Taj, Kozhikode, HDFC building and the Gandhi Park, the Shantikavadam and many others, was to open my eyes to a new world. Next time I see those buildings and projects, I would say with pride that my friend Gopakumar did it and I would feel a few inches taller.

The book is a veritable goldmine of ideas, architectural concepts and techniques, secret of the author’s success, stories of those who helped him and inspired him, advice to the next generation of designers, stories of the institutions which shaped him, his family stories and the impact of natural surroundings on his work. We knew the whole family at different times and his brother Hari is a close friend. The last time I met the whole family was when I was invited to inaugurate the paintings of the artists in the family at the Balabhavan. It was a formidable collection of art work. “Being systematically crazy is the first quality of a designer”, he says. His punctuality, consideration for his support staff and his habit of meditating with the staff every morning etc reveal his personality throughout the book.

One major attraction of the book are the spectacular drawings of some of his creations and other attractions, including his tharavad, the house designed for himself and his niece and the many landmark buildings throughout Kerala. Architects claim that theirs is the oldest profession as the Lord God created the world out of chaos, but diplomats claim the distinction by arguing that they had to be there before them to create the chaos in the first instance. But ‘Mind of Fire’ convinces me that architecture is a great vocation. “Being professionally successful, financially stable and honest is a tough combo,” he says and concludes, "But I have been tough. Hope you will be too!"